CALM – Abortion reform in the Isle of Man

Home / News / CALM – Abortion reform in the Isle of Man

CALM – Abortion reform in the Isle of Man

Time for a CALM update

Two years since setting up CALM we thought it was time to bring everyone up to date.

In 2016 a small group of activists decided that it was time the Isle of Man’s outdated Termination of Pregnancy (Medical Defences) Act was updated.  Women who were unhappy about being pregnant, or were unable to continue with a pregnancy for any reason other than rape or severe mental health issues, were left outside the Island’s healthcare system to fend for themselves.  If they could afford a private abortion, they had to travel to other jurisdications to access services there, or they had to break the law by buying perfectly safe but illegal abortion medication online.

By June 2016 the Campaign for Abortion Law Modernisation had a name, a logo, a Facebook page and a pro-choice message: the system was wrong and the law had to change. And we demonstrated outside Tynwald to let the politicians know that we we’re here and we mean business.

We also started to collect ‘abortion stories’ to use in our YouTube film – with an image of 105 pairs of shoes to represent the 105 women who went to England at their own expense for abortions in 2015.  You can see the finished film (made by Kara Varetto) here

And we started a change.org petition to gain support for modernisation of the Island’s abortion law.  By the time this closed on 1 November 2017 it had 2,795 signatures – and we presented it to the Chief Minister Howard Quayle MHK

Abortion as an election issue

In September 2016 the House of Keys election put the issue of abortion law reform firmly on the nation’s radar.  Isle of Man Newspapers asked every candidate their views,

and the public asked questions on doorsteps and at hustings across the Island.  And they turned out to vote.  In Ramsey, popular pro-choice candidate Dr Alex Alllinson put the need for a new abortion law in his manifesto and won the highest number of votes of any candidate in any constituency.

Just a few months into the new administration, at the January 2017 sitting, Dr Allinson MHK, took the bold step for a new MHK of asking the House of Keys permission to introduce a Private Member’s Bill to reform the existing abortion law.  When it was granted (despite some opposition, including from the then Health Minister) Dr Allinson then sat down with the legal drafters to begin to construct what was to become the Abortion Reform Bill 2017.

Unconnected to CALM, medical researcher Dr Rebecca Rowley (of Liverpool and Keele Universities) was frustrated by the then Health Minister’s ignorance of research from the early 1990s which showed pregnant women in the Isle of Man nine times more likely to attempt suicide than their counterparts in the UK, where it was 25 years since the 1967 Abortion Act.  She was already aware of the shame associated with abortion in the Isle of Man and applied for funding and, crucially, ethics committee approval, to conduct research into this secrecy and stigma.

By October 2017 Dr Rowley was ready to present the results of her research to politicians, health care professionals and the general public.  In her presentations she was at pains to point out that media fanning the flames of what it says is an emotive issue further stigmatises those who have abortions and makes them even less willing to speak out and that, as she concluded,  “Providing abortion as part of reproductive healthcare safeguards the health and wellbeing of women”.

Keeping the issue in the public eye

Whilst Dr Allinson was crafting the Abortion Reform Bill, CALM knew that it was important to keep the public engaged but an anti-choice group rescue.im really attracted attention with their ‘peaceful protest’ in Douglas setting out its stall to ‘abolish abortion in the Isle of Man’.  Without doing anything at all, CALMs pro-choice message was back in the news when supporters wrote to the papers expressing their disgust at the images rescue.im used on their placards.  Just a couple of weeks later it was pro-choice group Handmaids IOM who made the headlines in July when, on Tynwald Day, a red-cloaked group of silent women (named after ‘The Handmaid’s Tale’ – the distopian novel by Margaret Attwood, where the handmaids of the title have no voice and no say over how their bodies are used) made an appearance on Tynwald field.  This silent pro-choice protest was later named the ‘political moment of the year’ by IOM Newspapers.

By August 2017, the Abortion Reform Bill was ready to go out for public consultation which took place over a six week period in August/September, online via the IOM Governement website and with hard copies available to anyone who wanted one.

Over 3,500 people, professional bodies and other groups responded – the highest number ever to take part in a public consultation in the Isle of Man.  Over 90% of those who responded supported reform but the curiously named anti-choice pressure group Humanity and Equality in Abortion Reform (HEAR) immediately claimed that the consultation wasn’t representative because it was held during the summer holidays when ‘most people’ were off the Island.

The Isle of Man is a self-governing crown dependency, but this individuality doesn’t mean it’s immune from pressures and interest from other jurisdictions.  Many professional organisations such as the General Medical Council and the Royal College of Midwives and the international group Women On Web submitted responses to the public consultation and there has been UK media interest since the early days of CALM, particularly from The Guardian, the BBC and more recently websites like BuzzFeed and politics.co.uk.

It has also drawn the attention of lobbying groups who are vehemently opposed to abortion for any reason – most significantly Abort67 who sent representatives to demonstrate outside Tynwald, in the main shopping street in Douglas and outside the hospital.  Ironically this – like the 2017 protest by local anti-choice group rescue.im – resulted in even more public support for the Abortion Reform Bill and for CALM – whose supporters managed to remain calm and to ignore these demonstrations despite considerable provocation.

Abortion Reform Bill 2018 – now in the hands of the politicians

After studying the responses to the public consultation carefully, Dr Allinson MHK and the legal team in the Cabinet Office redrafted certain clauses accordingly before the Bill had its first reading in the House of Keys in January 2018 – one year since Dr Allinson was given permission to introduce it.  Two weeks later, on 30 January, it had a second reading which was passed unanimously by the House.  An attempt by Chris Robertshaw MHK to have the Bill sent for consideration by a select committee was defeated by 17 votes to 5 after a number of MHKs expressed disquiet that this was merely an attempt to consign it to the ‘long grass’ where it would linger for months.  Instead it is to be considered by a ‘committee of the whole house’ next Tuesday, 13 February prior to the ‘clauses’ debate in a few weeks time.

Read on next week to find out what happen  ….

AT LAST! CALM applauds Tynwald for finally seeking feedback on the provision of Isle of Man Abortion Services 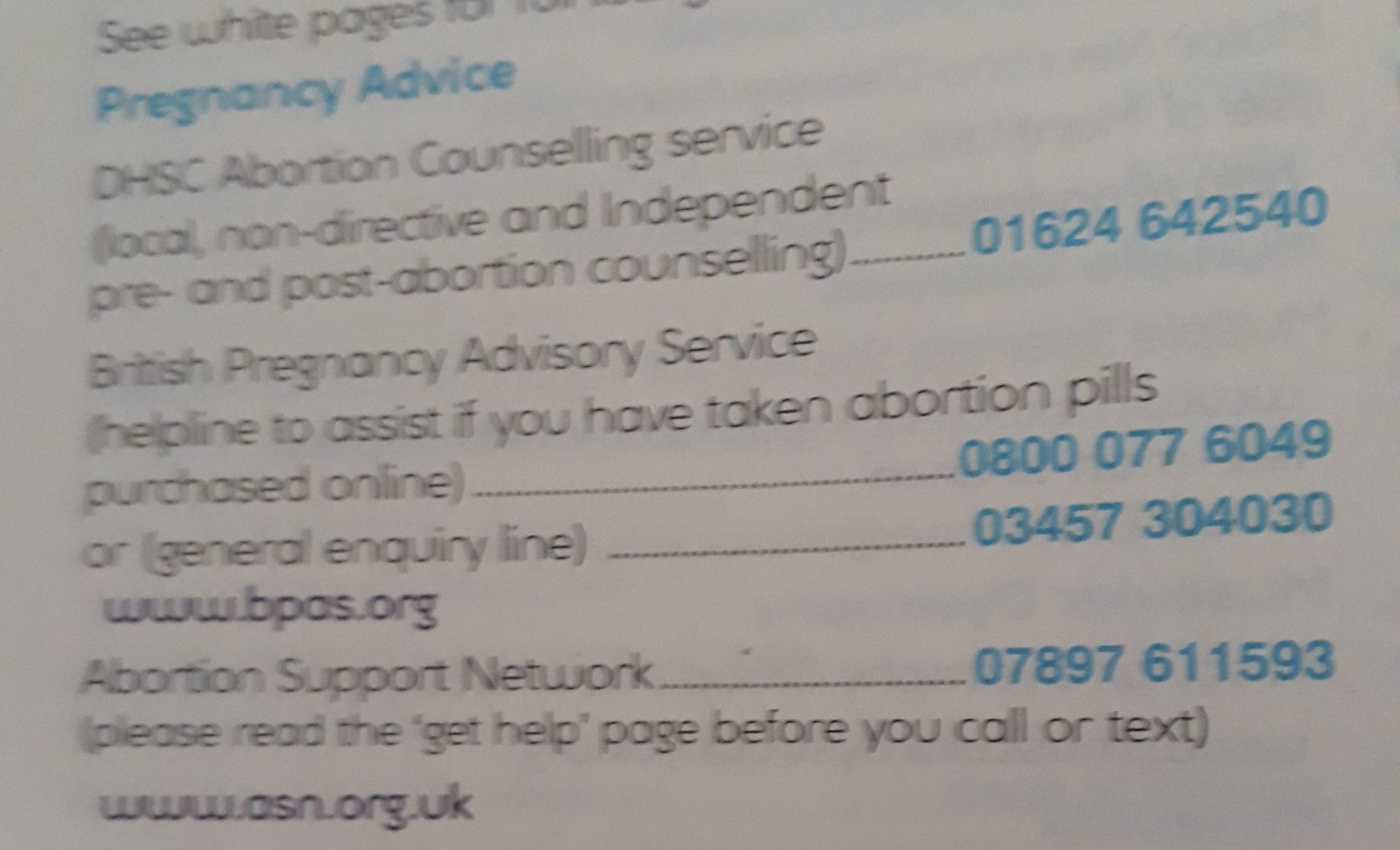